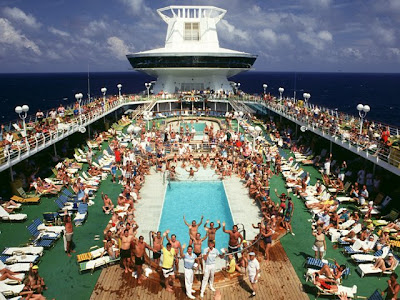 Cruisers are social animals by nature. They are joiners. For the most part, they belong to groups and organizations, and seek to meet new friends when they cruise. "Picture the best friend you've never met." That is the promise inherent in a cruise vacation...yet at the turn of the century - the cruise lines failed to understand it, or lead with it.

In 1999, I met with a friend from the airline industry who had recently become the President of a very large cruise line, who informed me over the course of lunch that he had just been on his first cruise. He went on to explain that he felt the need to have the ship’s communications department facilitate ship-to-shore communications capability just for him, so he could check his e-mail while at sea. I told him then and there that his company (and all other cruise lines) would be retrofitting their ships to facilitate the same connections for their guests that he demanded for himself – in every cabin. He told me it would never happen – as the costs were too prohibitive. I explained that his prospect’s communication needs were no less important than his own (from their perspective), and that he had just articulated a major cruise resistance factor that needed to be overcome. What he perceived to be a “cost,” was actually a huge (“wish you were here”) marketing opportunity, one that self-liquidates through use fees. The industry has subsequently proven me right, as every major vessel now offers internet capabilities to its guests.

B.I. (before Internet), booking a cruise necessitated the inclusion of a commissioned travel agent in the education/facilitation process (for an 18% fee). At the point where the Internet had achieved a 50% rate of adoption in the US, the developing cruise-specific social communities were facilitating Internet-enabled-word-of-mouth to such an extent that every question any prospect might have to achieve a comfort level sufficient to purchase a cruise, was easily answered by the community. Direct booking (by phone) was being facilitated by the conversations that were occurring online, saving the Contemporary cruise brands $180 per booking on average.

If you’re reading this, you may well have been among the early adopters of online travel research and booking, for whom the Internet replaced the travel agent for all of your research and booking needs. A mindset developed among this cohort that they would no longer rely on travel agents. One problem. Cruises are a highly complex purchase, and fear of making the wrong decision was causing booking paralysis among this contingent. As a result, these would-be-cruisers were spending weeks and months on message boards, hoping to attain the knowledge and comfort level sufficient to book their first cruise. While the industry’s reseller channel was under direct attack, the cruise lines had yet to make the online tools available to facilitate the transaction in this new paradigm, for fear they would be perceived as cannibalizing those responsible for booking 95% of their business. While an industry struggled to maintain the status quo, the online cruise community blew right past them.

While most were conducting their research as a couple, these interactions led prospects to seek a connection with other couples who were already booked on the same cruise they were contemplating. This organic trend was witnessed in real time, in its infancy, by this author. The ramifications were tremendous, and would change an entire industry. The disintermediation of the reseller channel was occurring before my eyes, in a most compelling way. Not only were cruisers providing advice, they were actually involved in selling the product – for free.

“Join Us On Our Cruise!”

What cruise line marketers failed to understand is that people were at least as interested (if not more interested) in the types of people who would be on their cruise as they were in the brand, ship or itinerary. Marketers had no desire to help prospective cruisers answer that question in 2002, as their budgets and mindsets were all geared to “broadcast mode.” While marketers were proclaiming “We’re prefect for everyone!” – potential cruisers weren’t buying it, as evidenced by the fact that 90-plus% of Americans had yet to cruise – this despite a huge percentage who said they’d like to.

As was hammered home in my subsequent e-marketing consulting for the aforementioned cruise line President, “You’re in the friendship facilitation business, and your marketing department doesn’t know it!” While I was spending most days reading the thousands of message threads on sites like Cruisecritic.com, learning wants and desires, fears, resistance factors and all the rest, marketers in the industry scarcely knew of this community’s existence – and certainly did not see the powerful future of Social Media that I foresaw – as it exists today.

Only by sheer tenacity was I able to push through a first-of-its-kind program, whereby a Fortune 500 company embraced an online community, honoring their value to the company. As couples with a cruise in common formed their own vertical affinity groups, we implemented a program to acknowledge and reward their online interactions once they boarded the ship for their cruise. A special party for each group was planned on every significant sailing. The online community was delighted to know that one brand was listening to their wants and desires (knew them by their screen names) and rewarded their online efforts in the real world - enhancing their vacation experience. As they returned to their cabins in the aftermath of these parties, they'd report back to their other onshore cruise friends in the broader Cruise Critic community - from the ship: "Here's a picture of our group with the Captain!" Powerful stuff!

Here we are all these years later, and corporate leaders and marketing departments are all abuzz about how to catch-up with this Social Media Tsunami and leverage it to their advantage. Here’s a little tip. It’s an art, not a science. Getting it wrong with heavy-handed offensive tactics can destroy your brand’s credibility among existing communities. Sensitivity is at least as important as creativity where friendship facilitation is concerned. What business are you in? What business could you be in? Are your marketers geared toward broadcasting - or are they listening, and then responding to delight your prospects in surprising new ways?

If your customer service department isn’t actively monitoring message boards where discussion of your product or service is concerned, you’re on the road to extinction. In the new world, customer service IS marketing, and for the most part, brand advertising is irrelevant. Community members who have legitimate complaints about products or services, and voice them online, should have an expectation of results. When you take steps to fix legitimate problems voiced within these communities, your brand’s critics can become your most ardent champions – and it can happen in real-time - to the boisterous applause of the broader community.

That said, there are one-hundred wrong ways, and one best way, to handle these matters. It’s not likely you have this skill set in-house. Sending in covert agents to infiltrate communities - or recruiting brand champions from within existing communities - will result in your brand’s public crucifixion (as occurred with my former cruise client when their marketers recently attempted this ploy). Treading lightly into these waters – with customer experience and customer service as your primary missions - will lead to brand loyalty, not as a direct result, but as an indirect byproduct of applied respect and common sense.

What can Market InSite do for your company's marketing culture? Let's have a conversation and discuss it. Here's what some former clients have to say: http://marketinsite.com/
Posted by Tom Martin's at 4:11 AM